In a Fred Walser mail piece I received today, under the header, "Sometimes, our elected officials do confusing things...," Fred Walser claims that incumbent Senator "Val Stevens told local residents they didn't have to cooperate with police. She said, they should hold up a card that reads, 'you don't have authority over me.'" 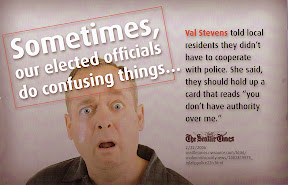 As usual -- Fred Walser was convicted in June of lying to public officials, and sentenced to a year in jail for it -- Fred Walser is lying. His language clearly implies that Stevens is talking about all residents and all police, but Stevens was specifically and clearly talking about tribal police having no authority over non-tribal residents. Lies by omission and implication are still lies.

And what she said was based on an opinion from the state Attorney General's office, which had just concluded that tribal police officers "generally lack authority to issue citations to non-Indians for traffic activity on public roadways and highways" on reservations.

Apart from the fact that Fred Walser is lying, Walser also is apparently implying that he believes that tribal police SHOULD have authority over non-tribal residents, which isn't necessarily the best position to take in the 39th District.

Fred Walser continues to have a serious problem simply telling the truth, like when he filed a false sexual harassment report, manufactured a fake log in a coverup, told an officer to fake an overtime log, and so on. On Tuesday I went to a forum held by the Monroe Chamber of Commerce, in which Fred Walser took credit for things he never did, including getting money for U.S. 2 safety during the last legislative session.

Fred Walser even had the gall to say he wants to work on "accountability" and "openness and transparency" in government, despite -- as a public official himself -- lying to the public for over a year.

Fred Walser has not given the people a single reason to trust him in the face of his many violations of the public trust, and blatantly lying about his opponent in a mail piece isn't going to help him gain a single voter's trust.
Posted by Chris Nandor at 6:51 PM

Valentina, Heart of a Lion said...

It is a sad day when people can justify Walser's pattern of deceitfulness and manipulations as a public servant. Mr. Walser has a proven pattern of behavior. His recent conviction of obstruction was far from his first offense and was a bit more involved than Walser and his supporters would like the public to know. Just GOOGLE HIS NAME! You will find newspaper articles, postings, and various media reporting about the following: rape allegations, sexual harassment, lying to investigators and officials, withholding a Sheriff report with evidence, contacting the top elected Sheriff, Rick Bart,trying to coerce him into blocking the disclosure of that all important Sheriff report in order to save himself and his assistant-Carole Pepperell, falsifying an accident scene report when working for WSP to help save his police friend's son from a crime, investigating citizens out of jurisdiction, condoning database abuse of private citizen information who come lodge any complaints about his police dept., frauding and submitting a report to save his administrative assistant get away with abusing police databases on citizens, hiring Pepperell when he knew she had a history of police database abuse on citizens and had been previously fired for it, costing his employers (WSP & City of Sultan)and taxpayers thousands of dollars for investigations surrounding his illegal actions, disposing of evidence, mis-management of police dept, and Walser stating in an interview the then Mayor disapproved of his "gestapo tactics". What does this tell you about the guy? He's a power monger and wants to be Senator.

Walser would tell you he is this upstanding guy who never lies and has nothing to hide......now that would be a lie! He apparently thinks lying is no big deal. It certainly seems to be a personal habit. It appears from all I've read and seen about Mr. Walser, he has an attitude of "it's what you can get away with". He has no boundaries because in his mind he's the man in charge...the man who "used" to wear the star.

Be sure to read between the lines on this guy before you cast your vote for Senator. It just might be one of the more important votes you cast!

Fred Walser has a long history of lying and not taking responsiblity. If one were to get a copy of his Washington State Patrol Employee records they'd see that he even falsely accused the troopers in internal affairs of things that it was proven he didn't do. The WASP also had to bring in one of their Troopers to impeach Walser's testimony in the trial where he falsified a police report to help the son of his friend, Pat Slack.

Fred Walser, former Police Chief of Sultan, ran as a Democrat for the Washington State Senate in the 39th District in 2008. He was at the time under a one-year suspended jail sentence.


Walser pled guilty in June 2008 to a gross misdemeanor for providing false information about misbehavior by his assistant in the police department (whom he never should have hired).


Walser's conviction highlights one of his most well-known transgressions, but it's far from the only one. He tried to convince the County Sheriff to violate public records law, filed a false sexual harassment complaint, violated an order from the mayor, and even pled the Fifth Amendment when asked whether he knew who his former assistant was. He has left the City of Sultan with a huge bill, and has left it open to huge potential lawsuits.


We felt that Walser's story was not known by the public, so we put together this web site to document it. We leave this site up for historical and informational purposes, not to continue to hound Walser. We have empathy for the man, but he seriously violated the public trust, and we can't allow this story to fall into the memory hole. Rather than trying to punish him in perpetuity, this site remains as a reminder of what happened.